I've been working on a project for a while called Trick which I love, but unfortunately I won't finish it for years and I feel I need to do a quicker project in the interim so I recently started a project tentatively called Memory Quilt.  Not sure about the name... it's either too obvious or it's perfect because to the average viewer it might tie the concepts together better.  However it kind of gives it an unconscious upbeat emotion, and I think ultimately this will be a rather depressing project, at least for me.  Which isn't a problem of course.  Art should evoke all kinds of emotions and although I think I'll find it depressing I'd like it to be up to the viewer and if some people walk away from it feeling gleeful nostalgia then that's fine.  Still I don't want to lead them there so maybe the name is bad... Anyway here's the project:

I'm creating an animation that looks as if every frame was quilted, by rotoscoping old home footage.  I'd like to tell the story of myself as a child and the death of art that occurs with each step we take closer to adulthood where we lose the desire to create simply for the sake of creating.

Below is a video of my first pass at it.  This was just to see if it was a feasible project.  Originally I wanted to quilt every frame but that would end up taking longer than Trick so fuck that.  I couldn't tell the story of the death of art because I'd die before finishing my art... very Andy Kaufman.  Anyway  I brought in some footage and then put the footage on 3's by deleting 2 frames for every one that I left then adding a two frame hold for the ones I kept.  Then I took out some random shots because the camera looked too shaky.  It needs to look like home movie footage but if it's too shaky it'll just make the animation look like garbage in the end.  I then took the footage and added an extra frame so that the footage is actually on 4's.  I felt this gave it a slightly dreamier quality.  I also added some longer holds at certain moments.  No reason to rotoscope it and leave it at exactly the same timing.  So there's a moment at the end where my childhood fact is in the camera it holds for 6 frames and the images on either side hold for 5, to ease in and out a little.

Ultimately I'd really like to hear what you think is and isn't working.  I'd like to make it look more like a real quilt so I might do it all in photoshop although flash does cut down on the work dramatically.  This is only a test.  The quality of the fabric will look better in the end.  Also If you'd like to know where I want to take it.  I will have a bunch of moments animated and then edit them in After effects.  I plan to use static as a transition and ultimately I would like to have pieces of established animation start to interact and run through other parts so that in the end it's all a mish mash of what's been established.  Maybe it will be about 3-4 minutes in the end.  We shall see.  knowing me it could end up being 14 minutes.  Who fucking knows? why limit it.  I'll just make it the length that's right.

Now here'a a picture of Artie, the strongest man in the world: 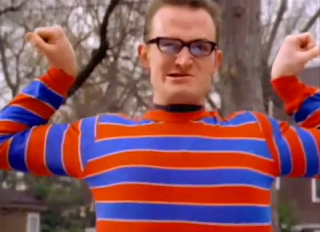 Just though he might liven this post up as it is a bit of a bummer.
Posted by Stu Beans at 12:42 AM No comments: