A couple new paintings to show off. 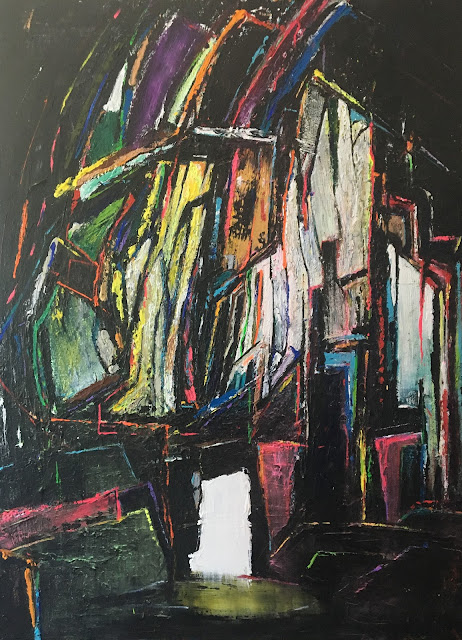 Sorry about the shitty lighting on this one.  Anyway this one's called "Anything to stand out amonst the tombstones."  And it's about trying to be noticed as an artist basically.  I have to fix one thing I at this moment noticed as I'm typing this, but it's basically done.  In case you're curious, whoever the hell "you" are, it's the green and white shapes at the top left of the painting.  They look lazy and banal but other than that I'm super in on this painting.

My interpretation btw: the white figure represents me.  It's the focal point and it does stand out as wholly unique against the looming figures all around coming to swallow it up, and if you look closely on the outskirts of the main figure you can see the beginnings of corruption.  That being said many people see the white section as a doorway and maybe the things around it are exploding out from it, or the doorway is a way to escape.

My main goal in this one was to have it feel less landscapey than most of my stuff.  I think I did pretty well.  Anyway whatever next painting. 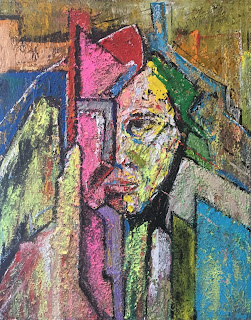 This is a painting of my friend Aurorah who came to visit a week ago.  I'd interpret it as being about her desire to find a new place to live.  Most of my work deals on two levels.  There's the way I interpret it and there's the basic contrast of nature vs. technology which seems to exist in all of them.  I see that here too.  But like I said, I see it in all of them.  I don't hate the city or technology at all.  I love my cellphone!  But I do want us as a culture to stop expanding and find more ways to incorporate nature into our daily lives.  I certainly fail at this constantly.  Not preaching, just ruminating.

Oh also the red part at the top of her head looks like a slice of watermelon.  Just sayin' I call this one "37 Year bad luck," because it kind of looks like a broken mirror, and when I stare long enough I can usually find some moment in it that looks like a figure from my past.  And yeah I'm 34 but it's still a good title.  Singers don't change their ages in song lyrics as they grow up so get off my ass about it!

Anyway it's similar to the first painting in that it's about living in LA and trying to navigate through it and stand out.  However painting (although more vibrant visually) to me is more bleak.  I've been swallowed up completely in this one.  There is no figure that represents me anymore.  It's also very flat and looks kind of like a map or wrapping paper or something. 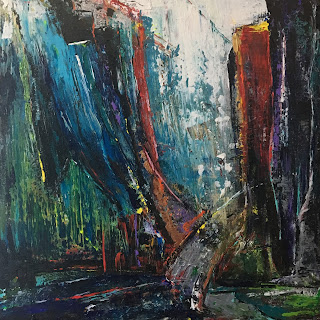 I don't have a title for this one, but it's about a very seperate trauma in my life right now from the above whiny baby ones of "people don't notice me waaaaa!"  This one's a bit more on the level of realness.  To me I see the front a canoe navigating an icy river deep in a snowy canyon.  Who know's what's around that upcoming bed. 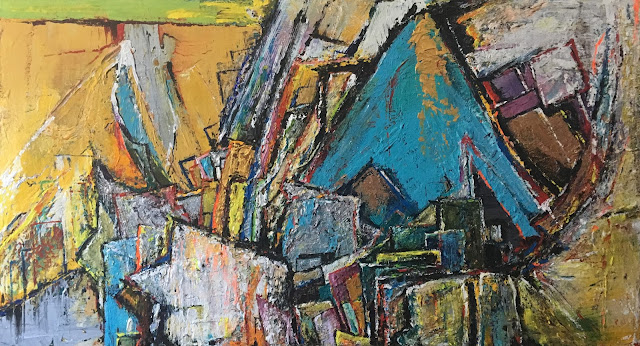 And finally I call this one "Waking Up."  This one is definitely about the continual corruption and disappearance of nature from our everyday lives, and the replacement of it with technology.  I grew up in the woods biking and hiking and I spent my summers at camp, canoeing and on the beach at Cape Cod.  I had a very outdoors heavy childhood and really I think I'm fucking sick of city living, but that's my job.  You can't really live in the country if you're an animator.  There are no animation studios in Long Valley NJ.  Anyway that's a large reason I'm interested in switching to painting as a career if I can get that going.  Then I can move the fuck out of the city.

So yeah I see two mountains, one of which has been completely overrun with buildings and people which are steadily moving towards the next one.  The one in the BG looks like a volcano errupting to me too.  It knows what's coming for it.  It's all very Hudson River School, which are some of my favorite paintings btw.

I call it "Waking Up" however because like I said above I typically can interpret my paintings in multiple ways.  I feel like if I can read at least two things from any piece of art I make, that the viewer will definitely be able to find their own meaning.  I like art to be interpretive rather than representative.  That's probably why I'm not much into surrealism or anything where you can go "The melting clock means this and blah blah blah."  However this one is slightly surrealist inspired in that to me the reason I call it waking up is it feels to me like what moment between dreams and reality.  When you know the reality you've been living in, where you can fly or get the girl or whatever, is coming undone.  And you're aware of this, but you're clinging to it.

To me I see this because that large blue shape on the right looks like a person's shoulder while the square shape next to it looks like a head, and the figure is rolling over towards the bright yellow reality in the background.  Everything else is a mixture of this person's dreams disappearing into their bed sheets.

So yeah, that's that painting.

Hope you all liked the new stuff.  LATER TATES!
Posted by Stu Beans at 1:14 PM No comments: