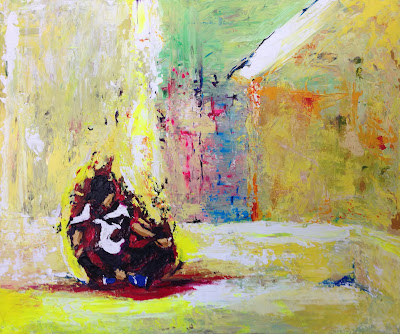 I made this painting of my friend Nick recently.  Originally I intended to do a portrait but then I got to his rood and was like "I need to utilize this space.  So I did this instead.

With this painting I feel like not only have I finally rediscovered my abilities from ten years ago but I have more direction than I've had in all my previous paintings.  More like this to come for sure.

Below are some photos from the day I used to help finish it, along with the progression. 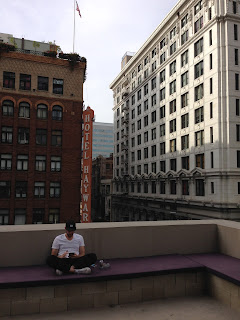 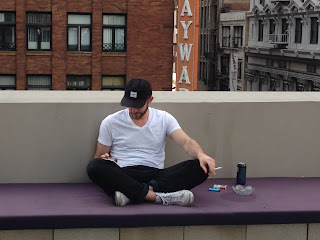 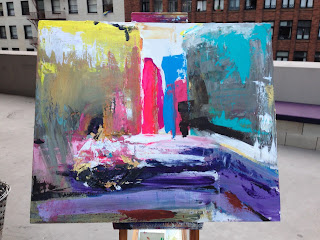 This was from the end of the first day.  I didn't really know what to do with it after that, but one night after painting I closed my eyes and I could see it in my minds eye.  Somewhere something in me told me to isolate Nick by painting around him with brown, then to use a pale yellow and cover over the rest of the painting.  I'd intended to cover the entire painting in a flat yellow but as I started I saw I needed to keep the depth.  As I painted around him it just started to look naturally like he was on fire, or like the fire's going around him.  I guess it depends on how you look at it.  THATS ART FOR YOU!  Now play the Yakkity Sax. 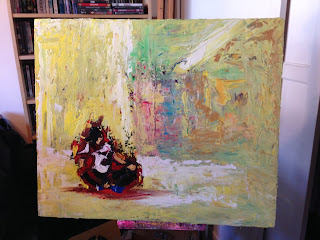 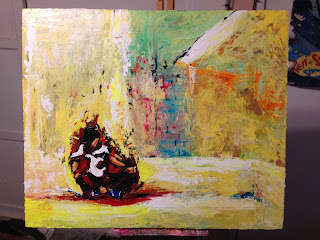 After the initial coldplayification in which I made it all yellow, there were only two more short sessions and a quick touch up while taking the final photo, where I added an orange line to define the facade of the building on the right.  You can scroll back up to see what I mean.  I also threw some random green on there while doing that... because WHY NOT!

OK enough from me.