Paintings - For Fear of a Boring Life, Longing for Forced Boredom 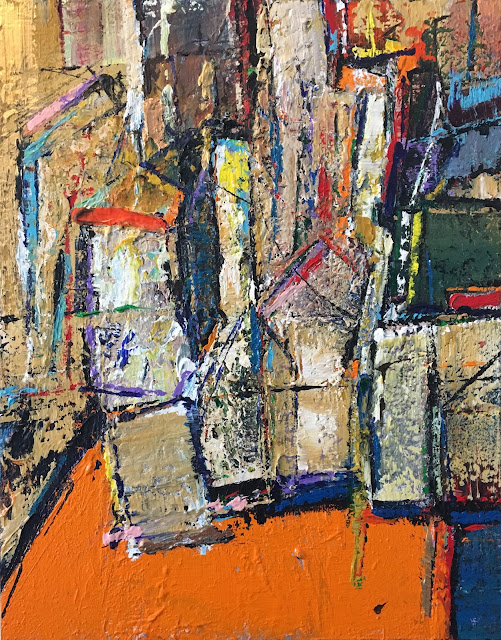 This one's called "For Fear of a Boring Life."  Read into it what you will.  I don't feel like getting into what it's all about, because it's a little personal that way.  The title gives enough away though that you can guess what you want.  Anyway I tried to limit my pallet this time (as much as I'm willing to do that) and keep it generally "70's" colors.  Obviously that's not exactly accurate but I did what I could and if you're desperately craving some 70's colors then here's a picture of Farrah Faucet for you. 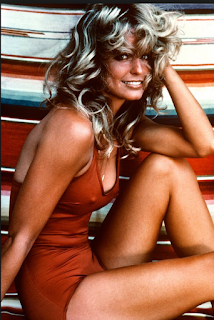 Anywho, I'm pretty friggin' excited about that one.  As for my next one... 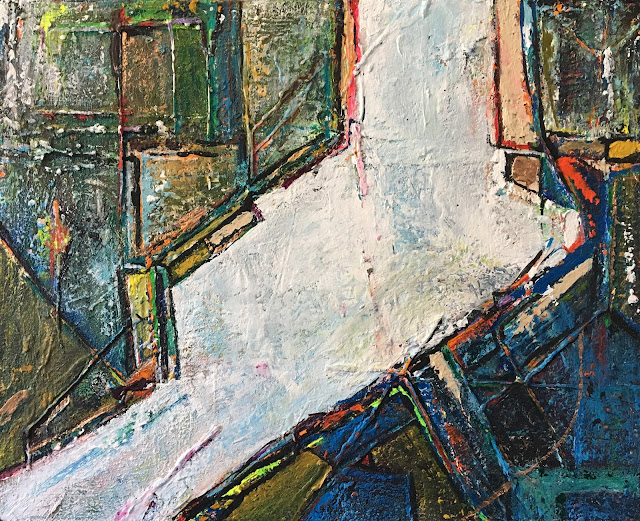 I'm also excited about it.  I posted it while it was in the process of being made.  But this is it completed.  The concept started by thinking of the image of sitting in a car on a snowy night and looking out and seeing the snow reflect back off the headlights like this... 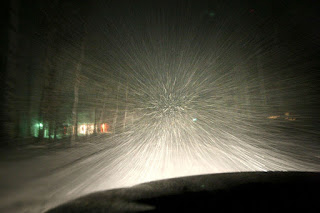 Or as it looked to me when I was a kid!

Ok it admittedly still looks like that to me today.  Anyway I used that as the starting composition and went from there.  For a while the painting shifted dramatically in tone and had a goblin drawn on it and the words "Hey Sunrise" scrawled across it.  It was about depression at the time.  But I kept coming back to the original idea and eventually scrapped the other concept.  I guess it's less an abstract painting now representing an emotion of an idea than it is one that represents a consistent memory or visual from my life... maybe it represents nostolgia.

The easiest thing I can say it represents it the feeling of being bored in a car as my parents drive me around listening to news and letting my mind wander.  I think we too often don't allow ourselves time to dream anymore, instead opting to fill up every minute with TV, books, podcasts, etc... We always say kids are so much more creative than adults but are they really?  NOPE!  Kids are fucking dumb, and all their stories are derivative.  They're just permitted way more time to come up with shit than we are.  I guess this painting is longing for forced boredom.  HOLY FUCK!  As I write that I realize that's the title of the painting.  It's no longer untitled.  I'm going to change the title of this posting to reflect that.  You are reading the creative process in motion. 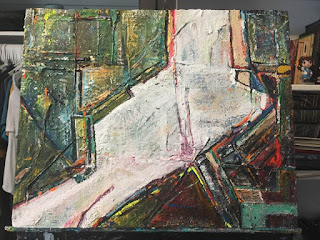 This is the painting when it was still in the process.  Haruhi Suzamiya is up in the corner sticking her tongue out because she knows it's still not finished yet.  Sorry Zach I painted over the red part too.

I dripped a lot of melted crayons on this one, which was fun but I learned some stuff.  Mainly not to do that where there's I plan on having a bunch of white eventually.  Because it will show through no matter how much I try to scrape it off.

I try not to "drip" too much.  It looks accidental and unless there's a large area I want to look accidental I don't do it. Because it always only goes in in one direction... down.  So everyone's drips are identical in art.  Sorry Dr. Ian Malcom but drips are fucking predictable and boring. 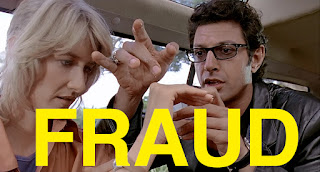 Sorry buddy but you're still the second coolest Ian of all time.  Anyway I didn't mind the drips too much in this painting ultimately because they were big and thick because they were wax, as opposed to the ones you get from paint, so they felt like little trees in the forest of Long Valley.  Anyway hope you like the new stuff.  And if you don't then I must go with the response my good friend Haruhi would provide- 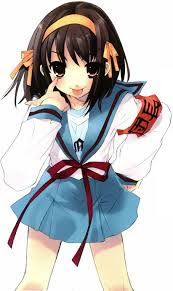