So recently I joined on as part of a "for fun" project called Moon Animate: Make-Up... or at least that's what I think it's called...

...anyway the idea is that a bunch of artists each take a separate shot from an episode of Sailor Moon and animate it however they feel like.  Then at the end the person running it is going to combine them all and post it on the web, basically just because it's funny.  I'm no giant fan of Sailor Moon.  For me growing up it was that show I had to watch before Dragonball Z came on, yet I did watch it and the project sounded fun.  Tonight I finished my first shot.  Not so sure I'll do another though I may if they will let me and if I think I have the time.

Anyway here is the shot I was given:

And the shot I animated:

I think it came out pretty good and it was fun to hand animate too.  The only problem is that I'm obsessive and couldn't start once I started.  Yet I've been steadily getting sicker all day and am currently feeling terrible.  Still I had to finish headache or no headache. 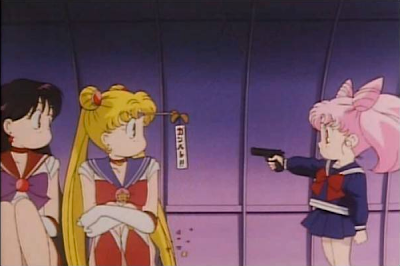