Painting - This Is Where I Was 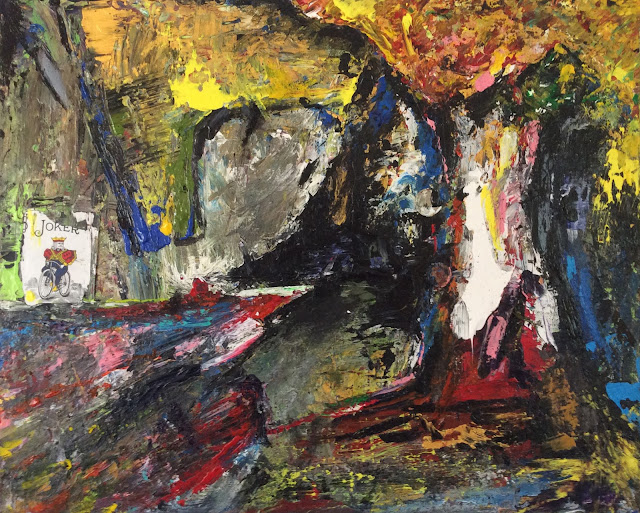 Since I started painting again a few months ago I've been avoiding using a technique I used in college, but for this one I decided to stop being so prideful and paint the way I used to.  That thing was to sit on the ground and hold the painting in my hands while I painted it.  And to put it on the ground and crawl around it like a maniac.  I would also crush up charcoal and rub it into the painting to gray out sections and create weird lines and add some chaos and finally to make some of the paint dry more quickly.  There was something inside me saying "Don't do it.  You should be able to make the same stuff you used to all while standing up at the easel like a dignified artist."  Well that was a stupid fucking thought because as soon as I did it the way I felt most comfortable creating, things clicked.  This painting could beat the shit out of all my other paintings, then fuck their girlfriends.  It's interesting to look at the progression too, because the first photo is from when I was still standing at and easel, and it sucks balls.  There's a dramatic swing upward immediately after.  The painting I just finished that I'll be posting about probably tomorrow, I made the same way and it too is just on a different level.  Sorry about the slight glare.  I'm good at painting... not photography. 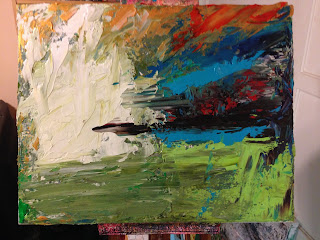 I find it interesting to see what compositional elements remained after the first session.  Clearly that horizon line, the green on the bottom and the orange/red on top.  Plus a big black splotch in the center. 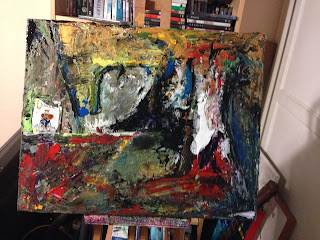 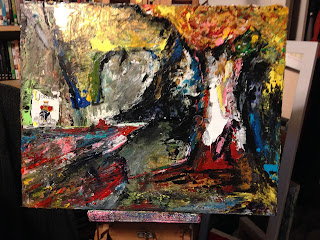 I had one final session where I cleaned it up from what it was before and just defined some stuff.  But over all there were very few final changes.