Obviously I've been painting up a storm recently and have finished 3 new ones... check em' out! 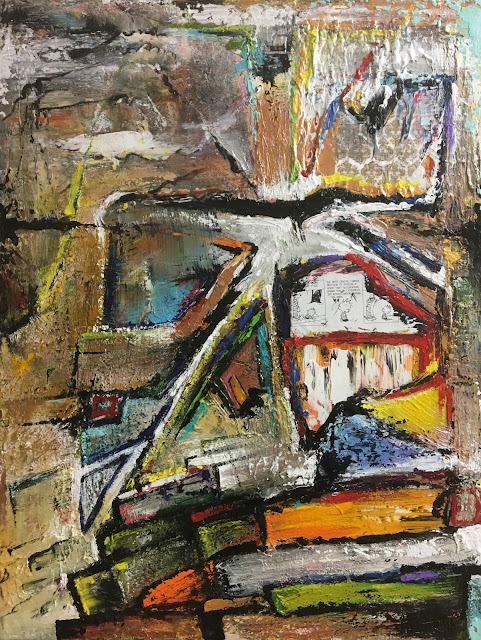 So let's start here.  This painting has taken me 3-4 months to complete.  It has been a tough slog honestly.  And I'm going to hold off a while on varnishing it because it's taken so long that honestly I want to wait and make sure I think it's 100% finished.

It took so long because, well because of a couple things, but mainly because of the subject matter.  It's called the challenge because it's about the struggle I'm constantly trying to come to grips with in my line of work.  I really love animation but I also love fine art and I don't want to degrade animation too much but it's hard to find opportunities to shine as a true artist within this world.  And I really want to.  My goal as an animator is to hopefully eventually bring something to the masses that can also be perceived as artwork in the end, and it's not easy.  Trying to balance a medium known for it's inherent silliness with my own desire not to just tell heartfelt stories, but rather ones with a deeper philosophical undercurrent is not easy.  It's hard just to get people to let you go for it, and if I'm ever fortunate enough to get that opportunity it'll be just as hard to make it work!

So trying to convey the two conflicting worlds of philosophical fine art along with fun silly animation within one painting, and showing how they clash, all while making the painting itself work, was- well- a challenge.  But I think I'm there.

You may have also noticed I shoved a Calvin And Hobbes cartoon into the painting.  The strip is important for two reasons.  First, no one has ever combined art and cartooning better than Patterson.  That's a fact.  So it's a visual reminder that it can be done.  I'm a little conflicted putting it in there, because I'm very much opposed to references in my work.  Personally I believe the only way to every rise up to the level of your influences and potentially pass them, is by making something that is wholly your own.  If I spend my whole life painting pictures of Mickey Mouse, no matter how revolutionary they are and what philosophy I have behind it, really they're still just derivative.  However I kept it in, because this painting is specifically about that struggle and problem so I think it raises up some interesting talking points on the subject.  And I tried to reflect this though speficially by putting an abstract reflective image of the strip right below it.  Second I put it in there because it's my favorite strip from the series because it perfectly wraps up in one sarcastic line, what I've been verbosely rambling on about for four paragraphs now, highlighting the succinct genius of the strip again and the challenge of finding a way to attain it's magic in my own art.  Below you'll find the line along with a couple images of the painting in progress.  I wish I had more but I accidentally deleted them.  This one has been through so many changes it would have been cool to see. 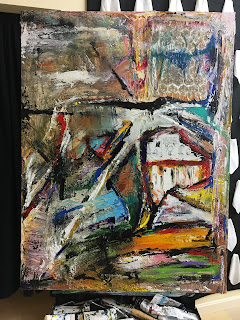 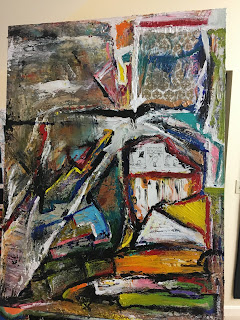 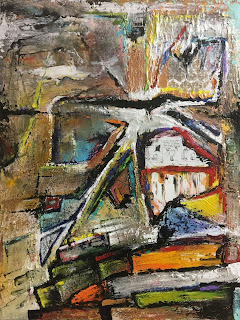 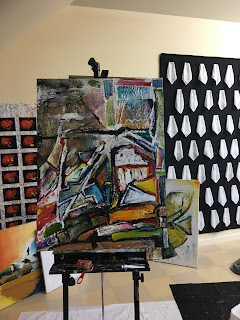 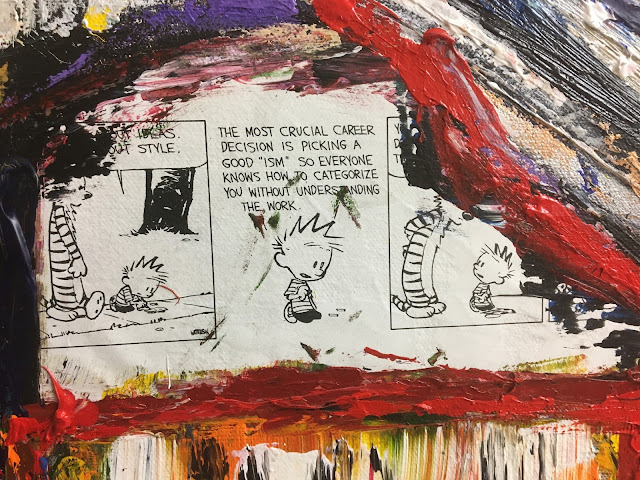 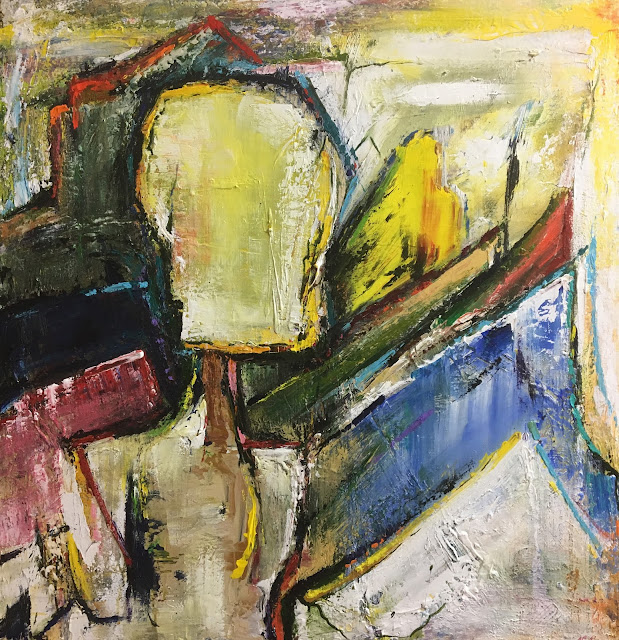 That's right.  This one is untitled.  Why?  Well originally I was going to call it "Accidental Perfection" but I was only going to call it that because I liked the way that sounded.  It really has nothing to do with the subject matter, so forget it.  And what is that subject matter?  Well there're a couple things in there but in a word the main subject matter is, well... fucking.

Yeah it's a painting about sex and relationships and all that good stuff.  And you may be looking at it and thinking "but that's a painting of a faceless, armless, feeble, armless man staring at someone who has climbed a mountain" to which I would reply... yeah.  Take it as you want.

Honestly I think it can represent anything that we're striving towards constantly against all struggles and reason... holy shit what a fucked up depressing painting.  Maybe I'll just call it "Oh Fuck."  I'll have to sleep on that though (pun intended).  Here's some photos from the process. 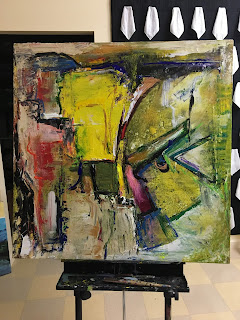 Early on there was also the face of a mocking woman laughing at the man... eventually that bitch went away. 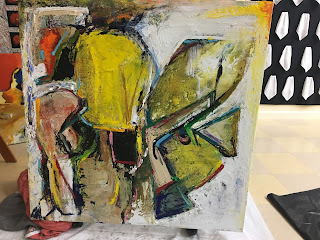 On to the next one. 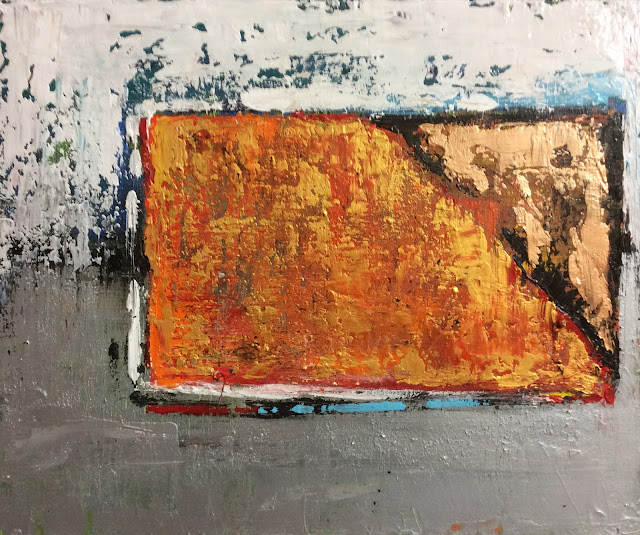 I made this one in only a few hours.  Obviously I typically favor more complicated compositions, but I wanted to bang one out really quickly.  The reason being that this one is about my Christmas trip out to visit my family and I wanted to finish it while the emotions were fresh.

I wanted to make this painting in particular because I made one last year.  Last year around this time I set out on a quest to reclaim the painting abilities I've let sit dormant over the past decade and reclaim myself as and artist.  And I believe I have done that.  I started out very stilted with stupid fucking thoughts about who and what I wanted to paint like and was avoiding using a lot of techniques I'd used and loved in college.  And all my work was stilted, goalless, and mediocre resultantly.  If you look under the "artwork" tab you can see the progression.  Everything changed on the painting "This is where I was" if you ask me because that's when I sat on the ground and started to work on it from a 360 perspective again, and started using multiple mediums and was working in a free flowing manner like I had in college.  Basically admitting to myself that if I want to be as good as I was back then, then I need to pick up where I left off in terms of process.

Since doing that I have developed specific goals and artistic philosophies that I'm aiming to portray and I've found my paintings have much more meaning to them.  Don't get me wrong, I love the paintings I made up until "This is where I was" but they're all still just practice.  The stuff I'm making now is my actual work.

So for that reason I wanted to redo a painting with a subject matter that I actually liked from the past and see how it cam out.   And I think it came out impeccable.  I fucking love it.  Sure it's quick and simple and dirty and definitely a deviation from the above paintings, but that's fine because so was the original one that was about my Christmas vacation.

This painting actually has a TON of personal symbolism in there, even if it does only appear as a box to most.  I kind of don't want to go in to it, because it's a bit too personal, but trust me it's in there.  But I will say that this is at it's core an abstract painting of my parents cabin which I'll post a photo of below along with the original painting from last year, entitled The Black Tree. 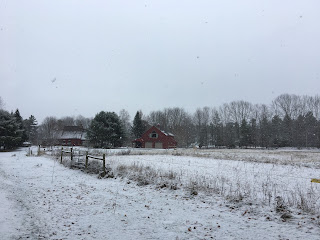 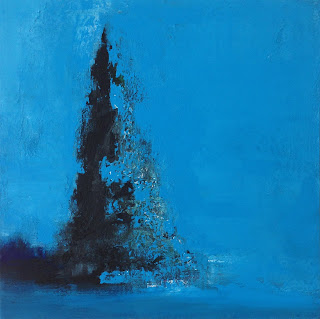 SO there you have it.  Hope you all enjoy the three new paintings because God knows I do, and I hope people are enjoying watching me paint on occasion.  It's been fun broadcasting the process.  Last year my goal for the new year was to sell a painting by the years end, though I'm actually glad I didn't.  I now have started to amass a series of paintings that I am very proud of and I think it's time to start taking them around and showing them to either galleries or submitting them to shows or whatever.  Now that I really know myself again I'm actually excited about the possibility of selling a painting and thinking about it hanging on someone's wall.  So look out world, here I come.  Let's do this shit.  Sell a painting 2017!
Posted by Stu Beans at 9:08 PM